STORY:  Spanky and Alfalfa play hooky to go fishing, but must take care of Junior instead.

An okay short, funny not so much for the antics of Spanky, Alfalfa and Buckwheat but for the Droopy Dog-like presence of Junior.  As a "playing hooky to go fishing" entry, it's about as entertaining as Fish Hooky (not one of the better 1933 films) and is a notch above Little Sinner and Little Papa.  But, seriously, folks... when will Spanky learn that playing hooky to go fishing always backfires?

STORY:  Hoping to get a job in the circus, Alfalfa brags about his animal training prowess.

I knew I was going to run into trouble with these one-reelers.  I loved them as a kid, I enjoy them today but... jeez louise, they are so compact and go by so quickly, there's really not much I can think of saying beyond "Another good entry" or "Not a bad little short".  So... Bear Facts is another good entry, and in fact, it's not a bad little short.  It's got Alfalfa waltzing with a bear to Laurel and Hardy music.  That's got to be good, right?

In yet another one of those leaps of continuity, Darla is a stranger to the Gang, having just moved into the neighborhood.

In Alfalfa's tale of how he and the Gang went to Africa to hunt bears, Buckwheat is depicted as a native guide, complete with spear.

THREE MEN IN A TUB

STORY:  When Darla falls for Waldo and his miniature boat, the Gang build their own and challenge Master Waldo to a race "for the championship of Toluca Lake, and Darla Hood!"

Three Men in a Tub borrows elements of past Our Gang films and blends them into yet another chapter in the Ballad of Alfalfa and Darla.  It is perhaps the best of the final Roach Our Gang shorts, and, ironically, it is not directed by Gordon Douglas but by Nate Watt. (Nate who?  No, Nate Watt!).  Perhaps it took another director to breathe some fresh air into the series, even if that fresh air is borrowed from Gus Meins's Hi'-Neighbor!.  The recycled plot is made new again by substituting boats for fire engines and using some above-average process work as well as location footage to convince us the race is real.  Three Men in a Tub also has some very good gags, including Waldo replying to a question so eruditely and completely that Buckwheat and Porky begin to back away in the middle of his lengthy, undecipherable answer.

About the only negative element of Three Men in a Tub is Darla Hood.  Darla was a fine member of Our Gang, and was excellent at putting over her character's coy, fickle personality.  But when handling straight dialogue, she sometimes left something to be desired.  Throughout the entire race, she keeps yelling out her dialogue in such a headache inducing way, you almost feel glad when Alfalfa accidentally lets her fall into the lake.

STORY:  Wildcat Alfalfa wrestles The Masked Marvel, thinking it is Waldo when it is really Butch.

Although it is obvious that the Our Gang writers were running out of ideas, borrowing old plots was not necessarily a bad thing.  Came the Brawn borrows from 1930's Boxing Gloves as well as the more recent Glove Taps, switches boxing to wrestling, adds a twist or two and winds up being as good a short as Three Men in a Tub.

This was the last Hal Roach Our Gang film for both George "Spanky" McFarland and Tommy "Butch" Bond.  Both would return to the series when it was sold to MGM.

For reasons known only to God, Came the Brawn was once remade in claymation, along with several other Our Gang shorts.  I hope nobody in Hollywood reads this - it might become the new remake trend.

STORY:  It's Mr. Hood's birthday, and the Gang comes over to lavish him with songs and presents, much to his consternation.

Another borrowed plot, another fun short.  Johnny Arthur returns as Mr. Hood, and the Gang return to make his evening miserable.  Only now, the Gang consists only of of Alfalfa, Porky and Philip Hurlic, a sort of "Stymie Lite" ("Now with fewer puns!") whose Our Gang career ended ten minutes after this film's opening credits.  Apparently, after Feed 'Em and Weep, Buckwheat came out of hiding, yelled "Here I Is!" and things went back to normal.  This is Philip's only short, but I feel like mentioning that he was pretty good.  He doesn't do anything special, and even muffs a line, but for whatever reasons, he feels like part of the Gang, even though he really isn't.  Compare him to "Spud" from Bear Shooters and you may see what I mean.

Feed 'Em and Weep is a winner thanks to Johnny Arthur's always amusing characterization of the put-upon Mr. Hood.  The Gang is more irritating in this film than in the previous Mr. Hood short Night N' Gales, but that is tempered by the fact that they genuinely seem to be fond of the poor guy, their sole purpose of coming over being to help him celebrate his birthday.  The celebration consists of singing "Happy Birthday, Mr. Hood" while presenting him with a frog, a duck and a cat, getting into an argument over whether Flash Gordon or Tarzan is stronger, and not allowing Mr. Hood to consume even a nibble of his dinner or dessert.

Alfalfa's rendition of "Many Happy Returns of the Day" is a bit painful to sit through, but otherwise, Feed 'Em and Weep is the last truly above-average Our Gang short from the Roach years.

MR. HOOD: "And to think that this should happen to me on my natal anniversary!"

STORY:  Lacking funds for baseball gear, the Gang plan to have their teeth, thereby getting money from the Good Fairy.   But the local dentist teaches them a durned good lesson, gosh darnit!

This short brought to you by The American Dental Association.  Or at least it should have been.  Jack Norton, famous for playing drunks, plays the dentist stone cold sober.  Too bad.  A drunken dentist would have least taken the edge off the preachy, afterschool special atmosphere of this film.  At one point, Elmer the Monkey threatens to create havoc, but even that comes to nothing.

Besides Jack Norton, the only interesting things about this short is the half-hidden advertisement featuring Babe Ruth in the window of the sporting goods store, and the final all-too-brief appearance of Pete the Pup in a Hal Roach comedy.  And remember, Doctor Schwartz says: take good care of your teeth and keep them as long as you possibly can!

STORY:  Detective Alfalfa's search for Darla's missing candy leads him into a Haunted House exhibit at the local pier.

Not bad for the last Our Gang short, but not great either.  A fun idea - Alfalfa, Buckwheat and Porky stuck in what they think is a haunted house - could have been better had Roach and company actually let the Gang loose in a real amusement park spook house.   Instead, they create one themselves out of what looks like leftover props (including a bogeyman costume from BABES IN TOYLAND) and novelties from a local magic shop.  It's not convincing at all, but it is amusing to see them trying so hard.

And with that, the Hal Roach version of Our Gang was officially... 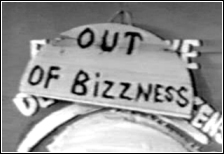 "Now what would Sherlock's Home do in a case like this?"