STORY:  Spanky's in trouble with the Gang when he misplaces their money.

Johnny Arthur makes his first of three appearances in the Our Gang series, here playing Spanky's father, a self-important fuss-budget who, although he boasts of his superior memory, cannot remember his own wedding anniversary, nor barely recall his own son's name.  ("Why doesn't Swanky get over here?", he asks at one point).   Arthur joins Don Barclay and the team of Seabrook and Treacy as one of the few adults allowed to be funny enough to steal scenes from the Gang.  He would do the same in two late Roach one-reelers, Night N' Gales and Feed 'Em and Weep, where he played Darla Hood's father.

Aside from Johnny Arthur's performance, the highlight, or lowlight, of Anniversary Trouble is when Spanky disguises himself as Buckwheat to fool the Gang.  It is almost always uncomfortable these days to watch any comedians of the 1920s and '30s dress up in blackface.  Spanky, being a child, emerges blameless.  (He's not the one who wrote the gag.)

This film is remembered by many Our Gang fans as the one with the "high sign", a ridiculous wiggling of the fingers under the chin as a signal to fellow Wood Chucks, the Gang's club.  In Our Gang lore, the high sign has lasted much longer than the Woodchucks themselves, who break up halfway through the film.

Anniversary Trouble features one other notable adult: Hattie McDaniel, who plays the maid and who, in just a few short years, would win an Oscar for her work in GONE WITH THE WIND.  She thinks the "high sign" is ridiculous too.

STORY:  Spanky asks the Gang to make sure he loses a local talent contest, but then changes his mind.

A fun short that features a sweet side of Spanky (he attempts to win the talent show prize money in order to help a poor little girl buy a dress), but even more than for its the entertainment value, Beginner's Luck is important historically.  This is the first Our Gang film for Carl Switzer, known to the world as Alfalfa.  His expressive face, natural comic talent and unique way with a song guaranteed him a spot on the Our Gang roster, especially with Stymie about to be phased out.  He quickly he became Spanky's comedy partner, relegating Scotty Beckett to the sidelines.

In the talent show, Alfalfa and his brother Harold wail their way through an atonal version of "She'll Be Coming 'Round the Mountain".  Alfalfa's persona at this time was that of a hillbilly cowboy, made explicit in his retort to a Spanky insult: "Them's fighting words, partner."  Other acts in the show include the Floradora Dollies doing a version of "Honolulu Baby" unfit for any ears, human or otherwise, and The Cabin Kids singing a terrific five-part harmony version of "Dinah".  They would appear again in the next film, Teacher's Beau.

The film's climax, where Spanky recites Shakespeare's "Friends, Romans and countrymen" speech while fending off a peashooter attack with his shield, is funny, but the humor is tempered by showing the talent show audience exploding with laughter at the Gang's antics.  It is never in the best interest of a film to tell the viewers how funny a sequence is supposed to be.  We'll figure out ourselves.  As Spanky would say, we're toooo smart.

SMALL TALK
MOM: "What has Clark Gable or Barrymore got that Spanky hasn't?"
SPANKY: "A mustache!"

STORY: The Gang try to stop their teacher from getting married.

Reaching back to the plot of School's Out, Teacher's Beau shows how the style of the films had changed since those days.  As usual for a Gus Meins film, the gags are all based on the narrative;  there would be no time for any tangential schoolroom vaudeville routines with the Gang giving funny answers. to the teacher's questions.  The most telling detail of how times have changed is the teacher's name.  In the past, the kids answered to Miss Crabtree.  Now the teacher is a generic Miss Jones.  Miss Crabtree you remember forever.  Miss Jones you forget the second the short is over.

Alfalfa and Spanky make for an immediately surefire team, and their first major gag is a classic: in an attempt to intimidate Miss Jones's beau, Spanky dons a fake mustache and, wearing a large overcoat, stands on Alfalfa's shoulders to pretend to be Miss Jones boyfriend.  Of course, Spanky's cover is blown when his mustache falls off and the cigar he is offered falls into Alfalfa's pants.  The second major gag sequence, in which the Gang sabotages the meal with hot sauce, horse radish, et. al, features a hilarious reaction shot of Buckwheat, who is so affected by the tampered food, his pigtails stand up straight.

This was Matthew "Stymie" Beard's final Our Gang film.  Into the series in Teacher's Pet, out of the series with Teacher's Beau.  The writing was on the wall even before Alfalfa was added to the cast.  Over the past year, Stymie's character had been changed from the cocksure kid always ready with a quip to just another straight man for Spanky and Scotty.  Stymie was the last link to the early sound films of 1930-31.  The Gang was now completely overhauled.  By the end of the year, both Eugene "Porky" Lee and Darla Hood would join the series, setting the stage for the Our Gang cast's most famous configuration: Spanky, Alfalfa, Buckwheat, Porky and Darla.

MY HEART IS FILLED WITH JOY, I WANT TO RIP MY PANTS

According to Leonard Maltin and Richard W. Bann in Our Gang: The Life and Times of the Little Rascals, Teacher's Beau may have originally been planned as a vehicle for June Marlowe and her Miss Crabtree character, but, as they quote Hal Roach remembering, the actress wouldn't come back to play the part.  A shame.  Miss Crabtree is almost as pretty as Miss McGillicutty, and she smells like a brand new haircut.

STORY: When a pretty girl moves into town, the Gang get all... well... spruced up.

Sprucin' Up contains one of my favorite Our Gang gags.  After each Gang member cleans himself up in his own way (Alfalfa combs several handfuls of lard through his hair), they all sit on the sidewalk pining for the pretty girl who has moved in across the street, hoping she'll notice them. When she does says hello, they immediately panic, scrambling away in all different directions!

Sprucin' Up is a cute Our Ganger, especially the first half, but the second half is an experiment to see what they could do with their new team of Spanky and Alfalfa.  As rivals for the affections of Marianne Edwards, they both show up at her house and vie for her attention.  It seems a little strange material for five year olds, the most impressive thing about the scene being how well they actually pull it off.

There is a nice exchange in this latter sequence  When Spanky asks Alfalfa how he got into Marianne's house, his answer is "Personality, boy, personality!".  When Alfalfa asks the same question to Spanky, his answer is "Brains!".  How well that would sum up the characters as they would evolve in the next three years. 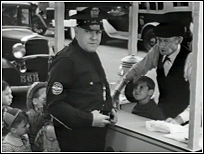 STORY: The Gang puts on a show to promote Grandpa Gus's lemonade stand.

The Lucky Corner succeeds by reverting to formula and revisiting the past.  Instead of pitting the Gang against each other as in several of this year's shorts, The Lucky Corner has the Gang battling with  two old foes: William Wagner and Leonard Kibrick as the father and son who ran the doll store in For Pete's Sake! and now run a lunch counter in competition with Grandpa Gus's lemonade stand.  The Lucky Corner also brings back Gus Leonard from Mush and Milk to play Scotty's grandfather Gus (he also had a bit part in Teacher's Beau) and tops things off with a mini-talent show.  Throw in a makeshift parade, some well-done sight gags, Alfalfa and Harold singing "Little Brown Jug" and a scene devoted to the art of the spit-take, and you've got what is arguably the best Our Gang short of the year.

The Lucky Corner introduces a new faster and brassier version of "Good Old Days", the Our Gang theme song.

STORY: On the day of the big football game, Spanky has to mind his little sister.

Another experiment for the Spanky-Alfalfa team, this time turning them into Laurel and Hardy as they try to get Spanky's baby sister to sleep so they can go play in the game.  The best moments are unintentional, such as shots of the little girl constantly breaking the fourth wall by looking off to the crew, and a fun lapse where Alfalfa completely forgets where he is in the lyrics of "Go to Sleep, My Baby".  The pained concentration on his face is hilarious, especially in light of the results.

How quickly thing change in the Our Gang world.  Scotty, having gone through a growth spurt, now towers over Spanky.  There is an initial attempt to use Spanky, Alfalfa and Scotty as a three-man team, but as soon as the action moves indoors, it is all "Alfalfa Laurel" and "Spanky Hardy".

Thanks to a peaceful woods setting rarely seen in Our Gang films, parts of Little Sinner are truly beautiful.  Buckwheat continues to be naturally funny and is joined by the cute Porky, Spanky's little brother, who is prone to eat flowers, worms and raw fish fresh off the hook.  As in Laurel and Hardy's PARDON US, the black spirituals are gorgeous to hear.  So Little Sinner has some good things going for it.

But in the end, it is a Sunday School sermon about what happened to the little boy who skipped Sunday School. It's not the religious overtones that are offensive; the kids are often seen praying in the early shorts.  Rather, it's the sermonizing.  This is not what Our Gang is supposed to be about.

Eugene "Porky" Lee makes his Our Gang debut in this film.  He would soon be a screen partner for Buckwheat. 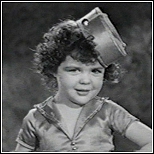 The first Our Gang musical.  Although it takes Our Gang completely out of the real world, it works as a kids-eye view of the typical Hollywood musical.  The music is rather impressive for a two-reel short, especially the introductory song by Spanky.

The final major Hal Roach Our Gang member, Darla Hood, shows up in Follies of 1936.  She was originally known as "Cookie", but with such a great name like Darla, "Cookie" was quickly dropped.  Hal Roach had cast her in Laurel and Hardy's THE BOHEMIAN GIRL the same year, where she shared several memorable scenes with Stan and Ollie.  It would take a while before she would become the coy, flighty object of Alfalfa's desire that most fans remember.  For now, she was sort of a Shirley Temple with sass.  In Follies she sings "I'll Never Say Never Again" in a precocious style that, truth be told, is very near to that which previous shorts poked fun at.

In with the new, out with the old:  Our Gang Follies of 1936 would be Scotty Beckett's final appearance with the Gang in the Hal Roach years.  He would return to the series after it had been sold to MGM, playing "Cousin Wilbur" in two shorts.

A racial running gag throughout the film: whenever the houselights go down, all you can see of the black kids in the audience are their eyes.